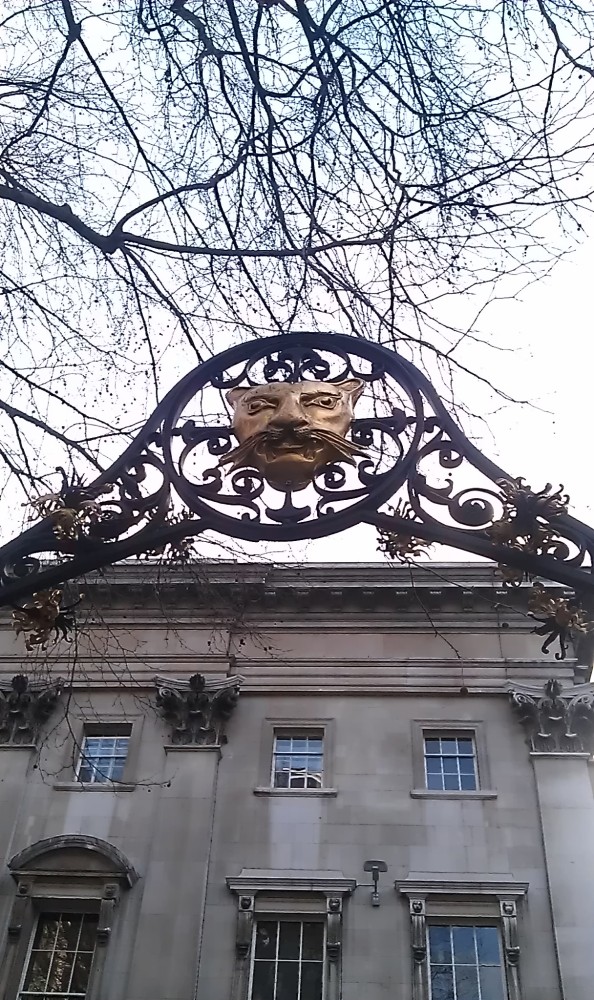 On a short trip around ‘my manor’ at work, I came across this lovely memorial garden on Gresham Street. It’s attached to the Lloyd’s building and is on the site of the former St. John Zachary church destroyed in the Great Fire of London. For those not in the know and who haven’t just looked it up on Google, St John Zachary is another name of John the Baptist. So there. 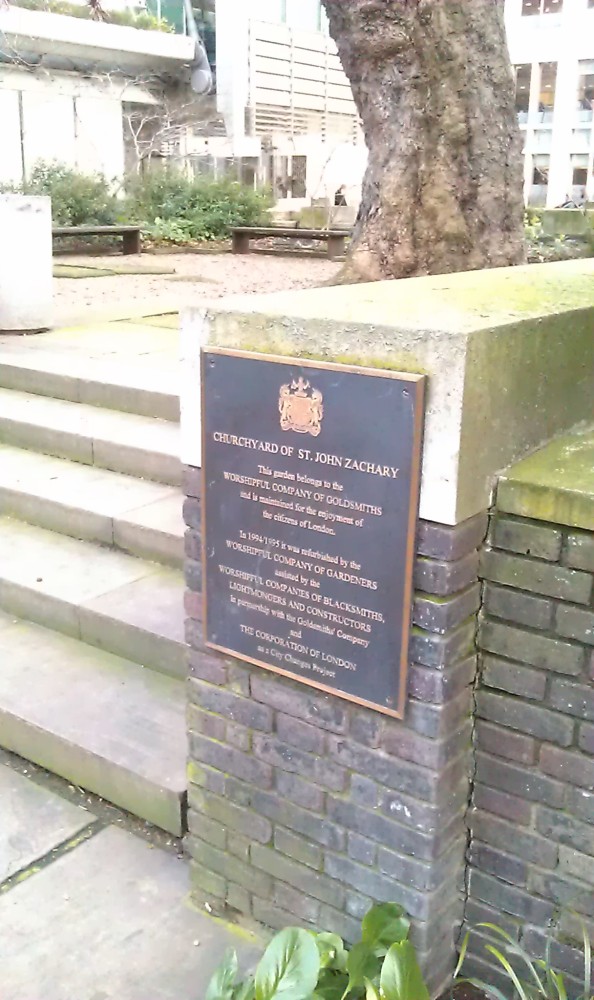 The plaque says it all..except about the cats

What caught my eye were the lovely golden cat faces that formed part of the ornate archway leading into the garden. No explanation accompanied the plaque, but digging about a bit (not in the garden) it seems that these may  have been rescued from the Goldsmiths hall and placed here. They do look lovely though. W

Happy New Year, y’all. With coming back to work, I thought I’d ease myself into it with a little stroll. And having no particular place to go, P and I  found ourselves in Salisbury Square, near Fleet Street. We were drawn by the incredible Premier Inn building work and the statue above. I can’t seem to find anything out about it but it looks pretty impressive. But more was to come with this obelisk opposite. 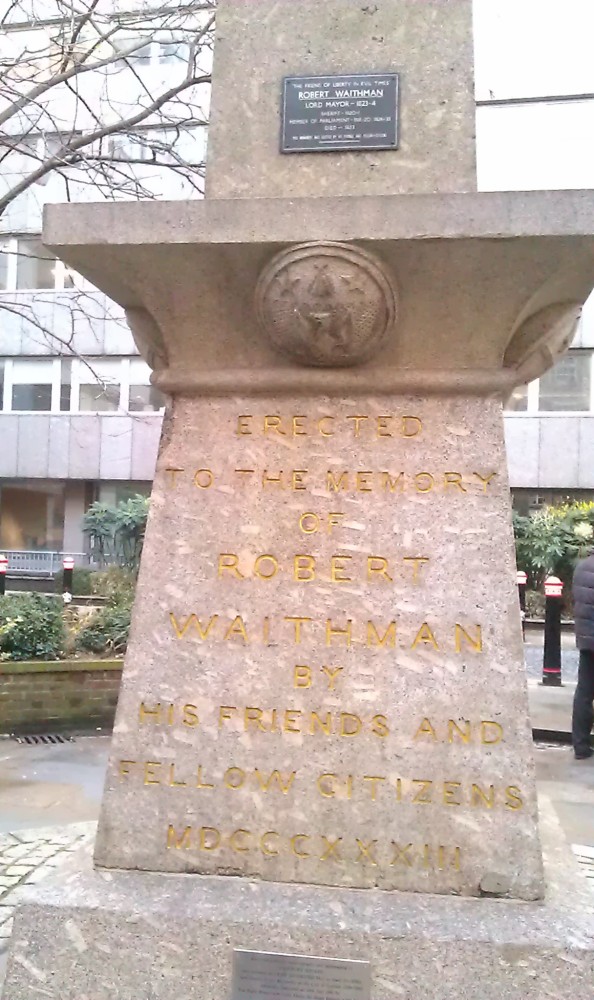 An obelisk is pointy

The thing you find with obelisks is that their raison d’etre is fairly obscure. On the black plaque that sits at the top, it reads “The friend of Liberty in Evil Times” and has no explanation as to what this would mean. From the fairly comprehensive notes on the London Details website, it would seem to refer to the wars with France, which Waithman steadfastly opposed. What fascinates me is that there are loads more of these stone trinkets dotted about the capital and I seem to pass plenty without really knowing why they’re there. But no more, I say! So here’s to finding out more about London stuff in 2014. W 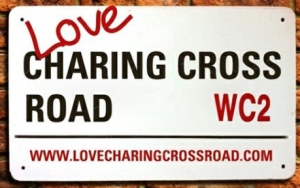 We may not have had much sunshine this week but it is summer and there’s a fair few things going on. As part of the Love Charing Cross Road Festival there’s some free events, one at Charing Cross Library on Sunday 23rd June that caught our eye, a talk called Brilliant Britain with Jane Peyton (from The School of Booze). Researched in the history of the sacred brew, Jane can tell you what Cleopatra or Jane Austin imbibed and is also the founder of Operalicious who arrange events where they serve food & drink which is themed according to what opera is featured which is also complemented by a professional opera singer. I reckon if that is anything to go by, this talk will be well worth attending!

Just around the corner on Wednesday 3rd July (just after 1pm) at the Crown Church of Scotland, Covent Garden there’s a bit of an mad one called “Latin American music for Oboe and Cello.”  As it’s says on their website: “guaranteed to get your toes tapping!” That’s got to be alright then!

And on a final note, on Wednesday night I passed a cheery guide giving a tour around Smithfields. Turns out she was from Most Curious Tours and was showing a couple of visitors The Golden Boy of Pye Corner on Cock Lane (they looked very happy too, laughing at the commentary and shouted to me “this tour is great!”).  It’s funny as the week previous I got a rebuff off a guide from another company (a bloke in a suit and tie in his 60’s) at the same location. When I asked could I eavesdrop just for a minute as I was interested in hearing about the golden (ball) boy, he replied “No, go away, this is a private tour!” Blimmin’ jobsworth! P

I meant to post this a couple of weeks ago, but almost forgot in the excitement of my museum visit. On my way to work I pass the Farmers and Fletchers’ Hall on Cloth Street, which is near Smithfield Market. For the last six months or so, all the windows on the ground floor have been boarded up. And every morning, since it happened, I’ve thought to myself – I must ask someone why it’s all boarded up. And every morning, by the time I’ve cycled the two minutes down the road to work, I’ve forgotten.

Now two weeks ago, I was strolling back from lunch and there was a fellow struggling to take something into the catering entrance of the hall so I took the opportunity to ask him. His name was Leo. A very nice fellow, he explained that they’re in the process of doing it up, refurbing all the downstairs rooms and they’ve boarded it up until it’s done. So there you go..

…but the story doesn’t end there. It turns out that Leo is the catering manager for both the Farmers & Fletchers’ Hall AND the Founders’ Hall. After expressing my interest in looking round the halls and my attempts to get tickets to see the Skinners’ Hall, he said he’d show me round the Founders’ if I had time.

The hall sits on the corner of Cloth Fair, just behind St. Bart’s church. It looks like a non-descript office building from the outside, albeit one with some ornately carved wooden doors.

Taken inside by my guide, Leo, I was shown the ground floor function room…

…before seeing the main hall.

Bust and back o’ St. Barts 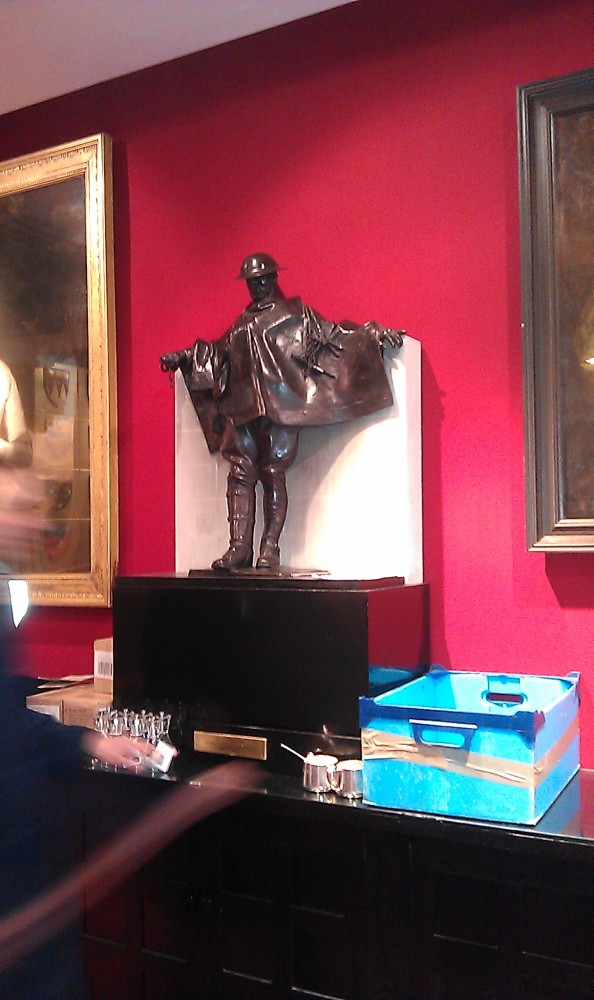 As you can see it’s not quite what you’d expect from a worshipful company hall. Designed and built in the 80’s, it took it’s cues from Japan but overlaid the accoutrements of hundreds of years of history and the baubles that go with that – heavy, dark wood, bronze sculptures, thick stone. I’m not sure it worked as an ensemble piece but the overwhelming feeling of solid permanence was quite nice.

The art dotted around the place was lovely. The company, originally representing the people casting candlesticks, bells and weights and measures, can also rely on bronze sculptors to swell its ranks. Unsurprisingly, this meant that there were a lot of sculptures. But painting did get in there as well..as long as it represented the craft. 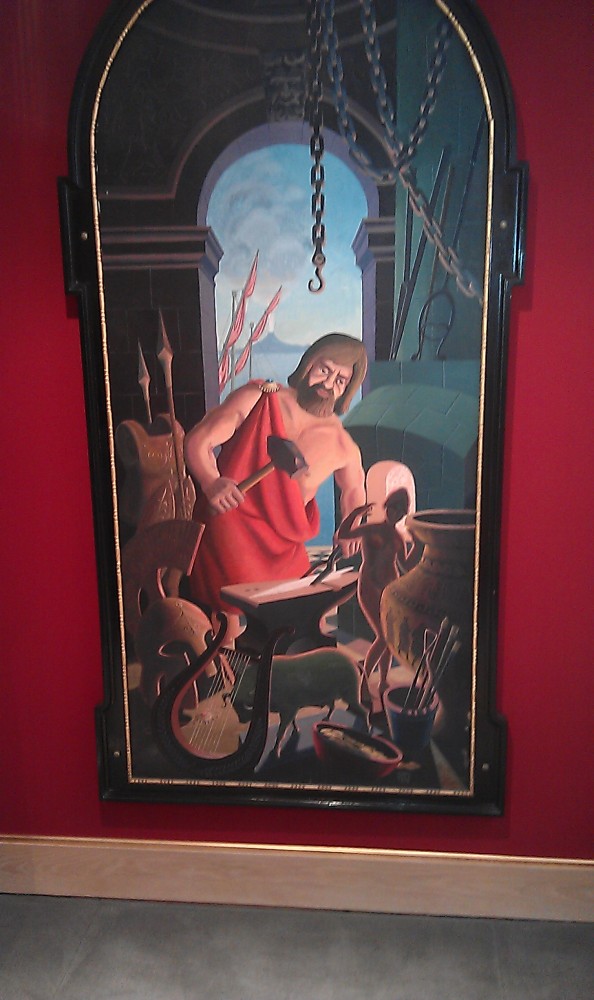 Hephaestus – The greek god of volcanoes.

Check it out! Leo said that the artist was quite famous and could I guess who it was. I’m rubbish with that sort of thing and had no idea. It looked almost cartoonish and a bit nieve to me, but didn’t ring any bells artistically.

Apparently, the company itself didn’t really know who’d painted it up until a couple of years ago. A woman sent them an email to ask if they knew of a painting that her father had done, as she was looking for it. She attached an image that was the painting of Hephaestus you see above. And her father? None other than John Ryan – the creator of Captain Pugwash. Look again at the painting. You can sort of see it can’t you? W

london in your lunch hour